“The partnership between Mattress Warehouse and ESB Advertising is one that I value for a multitude of reasons, not the least of which is the efficiencies that they have afforded us.  Their level of expertise is clear as they ensure that we reach our frequency goals in front of the right audience.  They have excellent relationships with the media across our markets, ensuring that we get the best rates possible.  I consider the team at ESB to be an extension of our Mattress Warehouse marketing team and truly believe in the value they add to our organization.”
Tracy JonesMarketing Director, Mattress Warehouse Mattress Warehouse began in 1989 in Frederick, Maryland – the first warehouse of which was a self-storage locker, and the floor space was a meager 1,200 square feet – a stark contract to the company’s sprawling store spaces seen today. Over 30 years later, Mattress Warehouse has expanded into 8 states with nearly 300 stores. Yet this growth did not come about easily; the company has faced evolving markets, heightened competition, and even a pandemic! But Mattress Warehouse has persevered, and attributes much of its more recent success to its partnership with ESB Advertising.

In 2017, Mattress Warehouse partnered with ESB Advertising to help grow its overall business through an enhanced media buying strategy. At the time, Mattress Warehouse had 193 locations and a small in-house marketing team. Tracy Jones, now the VP of Marketing at Mattress Warehouse, knew that her team was not getting the best rates on media placements and didn’t have the bandwidth or budget to scale their advertising efforts. But the mattress market was growing more competitive every day as new boutique entrants and online “bed in a box” trends added to the already crowded space dominated by a few large incumbent companies. Plus the target audience of the mattress industry is very broad – since every adult needs a bed at some point – making it challenging to establish brand awareness and stand out from the competition.

That’s where ESB Advertising came in: Jones says she teamed up with the group because, “they’re on the forefront of the latest advertising strategies and technologies which allows us to stay competitive in a highly-competitive mattress industry.” ESB began by first creating a custom reporting tool to track and measure advertising impact and marketing expense at each location. The custom dashboard helped pinpoint what was working, and more importantly, what was not. Once an assessment was complete, ESB ran advertising campaigns across local markets. Given ESB’s long-standing presence in the programmatic video space, ESB was also able to negotiate several private in-house deals that helped drive down Mattress Warehouse’s marketing costs and expand their reach beyond TV and into streaming placements such as Hulu, AT&T, Sling TV, etc.

ESB also helped Mattress Warehouse enter new markets. States like New Jersey and South Carolina where the company didn’t have an established footprint were uncharted territory. ESB not only assisted with the market studies and competitor analyses, but also led the media buying strategy advising on what local networks would drive the most impact. As Jones explained, “ESB Advertising doesn’t just execute our advertising campaigns, in fact, we rely on them as a collaborator and they play a big part in helping us set the actual strategy.” Perhaps the biggest challenge the two companies faced together though was the Covid-19 Pandemic.

The pandemic was particularly challenging for Mattress Warehouse because it relies on in-person traffic and offers a highly “interactive” product – most people coming to a mattress store want to lie down on the beds, touch them, test them out. To make matters worse, budgets (particularly those for advertising) were greatly reduced given the uncertainty of the times. But together ESB and Mattress Warehouse created a new campaign aptly named “Our Clean Shop Promise” which promoted the numerous safety precautions Mattress Warehouse was taking to keep its customers safe in-store. Despite the challenges, Jones says that ESB Advertising delivered, the campaign was a success and within budget! But really, the proof was in the pudding. For one, Jones says the so called “black box magic” that advertising companies typically relay was made approachable and easy to understand by the ESB team so that results can be assessed, and decisions can be made efficiently and effectively. Traffic counters in each store also revealed what Jones called “noticeable increases in traffic, even for pandemic times”.

Beyond that, ESB Advertising has helped Mattress Warehouse’s overall business expand, increasing the number of stores from 193 to 292 since the companies began working together. A 50% increase in the number of stores in such a short time period is no small feat, but it was made possible in part by Mattress Warehouse’s strong partnership with ESB Advertising and the increased exposure it brought. As Jones describes, “ESB Advertising is a true partner for us in every sense of the word. They care about the long-term success of our business, and that was made abundantly clear especially during the pandemic in 2020.” 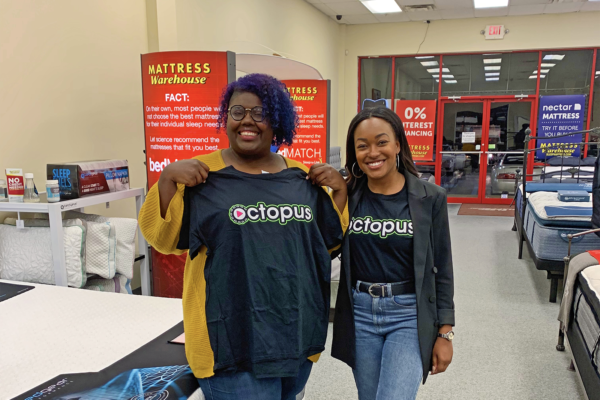